In this tutorial, we are going to learn how to run a node script with windows task scheduler.

To run a node script with windows task scheduler we need:

This can be any scripts that can run in node. We could have a script that takes a backup of a database and uploads it to dropbox, or a script that moves old log files to a Logs folder.

In this tutorial we’ll use an example script - script.js. script.js prints ‘Bedtime!’ to the console:

If it’s not installed already, download it and install.

To check node installed successfully enter node -v into git bash, or another shell. If the command is not found, node did not install successfully.

We’re going to use git bash shell to run the command that runs our script. (Because who wants to work with CMD.EXE?)

If you don’t have git bash installed already, you can download it here.

Got it installed? Great. Now we need to open up Windows Task Scheduler.

Windows task scheduler lets you run tasks automatically. You can set commands to run in response to events, like starting up windows or logging in as an admin. You can also schedule them to run at regular intervals.

To set up a task to run in Task Scheduler, we first need to open start task scheduler. For Windows 8+ search task scheduler in the start menu search bar and open it from the results.

When Task Scheduler’s open we’re ready to add our task.

We need to create a task that will run our script.

For this example, we’ll add a new folder - Scripts. Adding a new Task Folder is easy:

The action is the thing that is run when the trigger occurs.

Our action is going to be - start git bash, navigate to the Scripts folder, run script.js in node.

We can start git bash using the Start a program action. The rest will be done using arguments.

Now git bash will start when our trigger is ehum triggered. The next thing is to add the arguments.

This is the meat of the tutorial. The arguments are entered when git bash is opened. They change directory to our Scripts folder, execute our script in node and close git bash when the process is complete.

Copy and paste the code below into the Add arguments input field.

This might look cryptic to you, but it’s just a list of commands for the computer to carry out.

-i sets the shell to run in interactive shell mode.

-c sets it to execute the first non option argument passed to it, then exit. So in our example it’ll execute the node command.

-l is short for login.

cd changes directory into the Scripts folder (cd - change directory). This is located in the user folder (C:\Users\Edd in my case). Git bash opens in the ~ directory, which is normally the directory of the logged in user.

Now our **New Action **dialog should look similar to the image below. 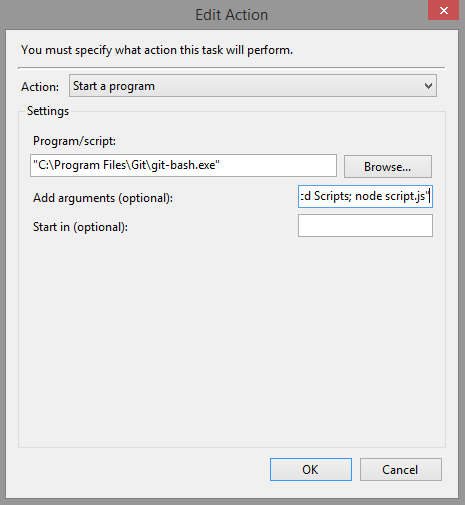 If it does, we’re ready to go!

Woop! The new task is saved and will run at 10PM everyday!