How to unit test a Vuex store

This article will teach you two different approaches for unit testing a Vuex store. You’ll learn how to test each of the store parts separately, and how to test a running store instance.

Note:I’m assuming that you have some experience writing unit tests with Jest and storing state with Vuex.

I’ll teach you the two approaches by writing tests for a store in an example app. The app fetches posts from the reddit API and renders a list of the items. You can see a screenshot below. 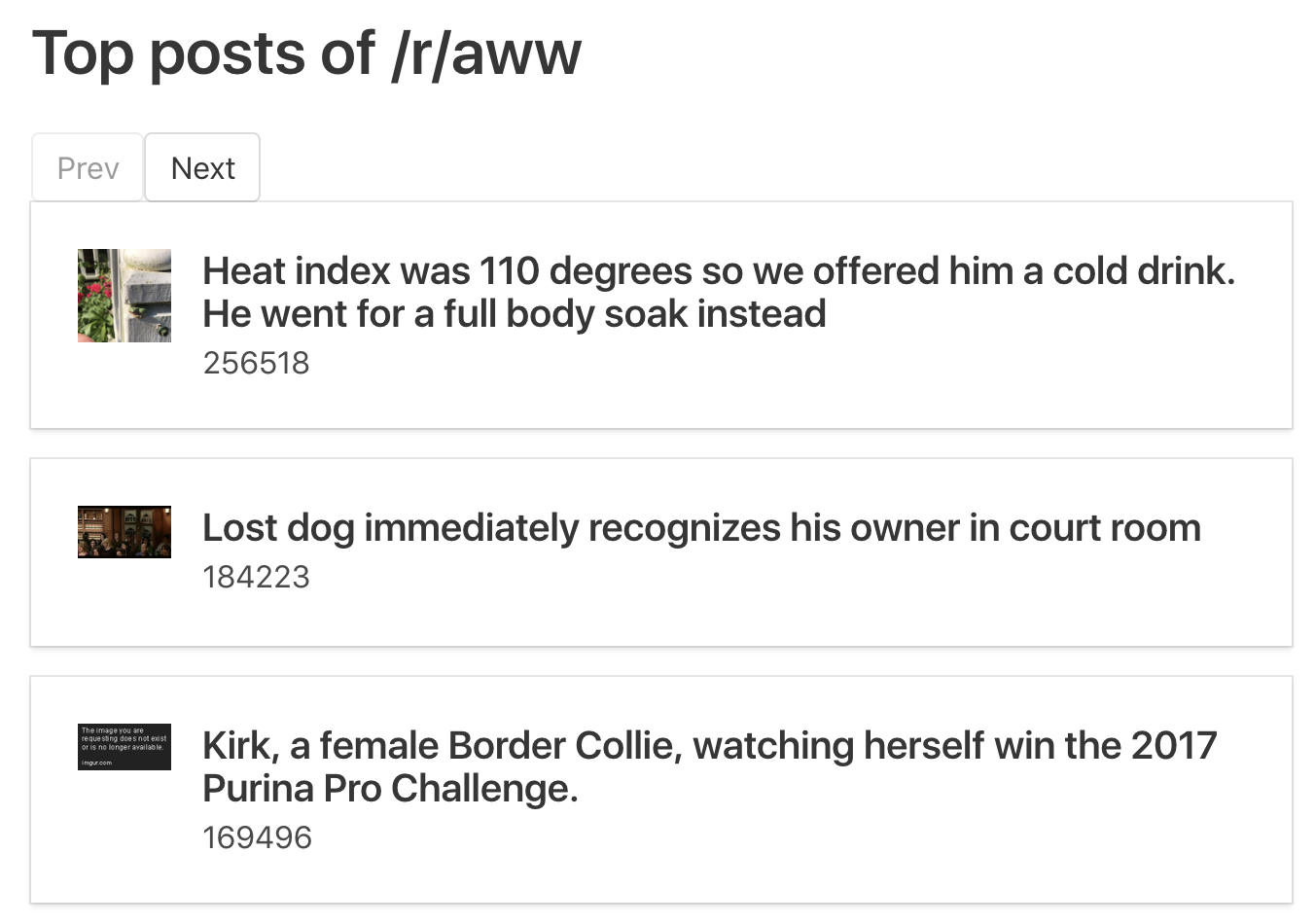 In the reddit app, you have a fetchItems action that fetches data from the reddit API and commits a setItems mutation. The setItems mutation updates the state.items value. The app then uses a displayItems getter to calculate which items should be rendered.

The first technique I’ll teach you is how to test each of these store parts separately.

Store logic exists in actions, mutations, and getters. These are all just JavaScript functions, so they are relatively easy to write unit tests for.

In the example app, there is a setItems getter that sets the state.items value.

You can test it by creating a fake state object, then calling the mutation with the object:

Often mutations are so simple that they don’t need to be tested explicitly. But if you have logic in a mutation, like filtering items in an array, you should write a unit test.

The next store part you need to learn to test are getters.

Getters are like computed properties for a Vuex store. They receive the state object, and an object of other computed getters that they can use to calculate a return value.

In the example store, there is a displayItems getter that uses the state.page and state.items value to calculate which items should be displayed:

The output of a getter is its return value, so unit testing one is simple. Call the getter with a mock object of data, and assert that it returns the expected value.

For example, the displayItems getter should return first 20 items if state.page value is 1.

To test that the function returns the first 20 items, you need to create an items array with more than 20 items. You can do this with a helper function:

In the test, you would create the items array and add the array to a state object. Then you would call the displayItems getter with the fake state object and assert that the getter returns the correct value:

Again, relatively simple. The final part of a store to test seperately are actions.

Actions are functions that can commit mutations, dispatch other actions,and interact with the store. They are often more complicated to test than mutations or getters because they might make HTTP requests, or interact with a database.

In the reddit app, there’s a fetchItems action that fetches items by calling a fetchData method, and commits the result:

To test that fetchItems commits setItems with the return value of the fetchData method, you need to control the return value of fetchData. To do this, you need to mock the api module. I won’t go into the details here (you can read how to do that in the Jest docs). The solution is to use the jest.mock function to mock the api module when it’s required in tests:

The second issue is asynchronous code. Again, I won’t go into details, but the key is to use an async test function, and then await the fetchItems action.

So in the test, you mock the api module and set the return value of the function to resolve with an items array. Then call the action with a mock commit function, await the action, and assert that commit was called with the correct arguments.

Note: If you aren’t familiar with mock functions, you can read about them in the Jest docs

Now you’ve seen how to test each store part separately. This approach is fine, but you write quite a lot of test code for source code that probably won’t change very often. The alternative approach to testing a store is to combine the parts together into a store instance, and test against that.

There are three steps to testing a store instance:

The first step is to install Vuex on a Vue constructor. The reason you need to do this is because internally Vuex creates a Vue instance to handle reactivity, and it needs to use a Vue constructor to create that instance.

The problem with this is that installing on the Vue base constructor will affect the constructor for every future test that’s running in this context. This can lead to leaky tests, which are more annoying than a leaky faucet. Instead, you can use a localVue constructor to install Vuex safely:

Once Vuex is installed, you can use Vuex to create a store instance.

This works fine for production, but if you want to create multiple instances in tests you to extract the logic to create the configuration object.

You could write a function to create the configuration object. The function should return a new object each time it’s called, to avoid any leaky tests that share state between store instances.

Now you can import the file in a test, and create as many new store instances as you like!

Now you can create a store using the createStoreConfig function.

The final step is to actually test the store. You can do this by dispatching an action, and asserting that the store state or getters values have updated correctly.

Putting it all together, you’ll get a test like this:

The great thing about testing a store instance is that your tests are less tied to your code, which makes them easier to refactor. The downside is that the tests are more complex.

In general, I would test a store instance if my store was quite small and unlikely to test. This lets me move fast while maintaining good test coverage. As soon as my project grows to include multiple contributors, I would start to test store parts seperately, because they are easier to test long term.